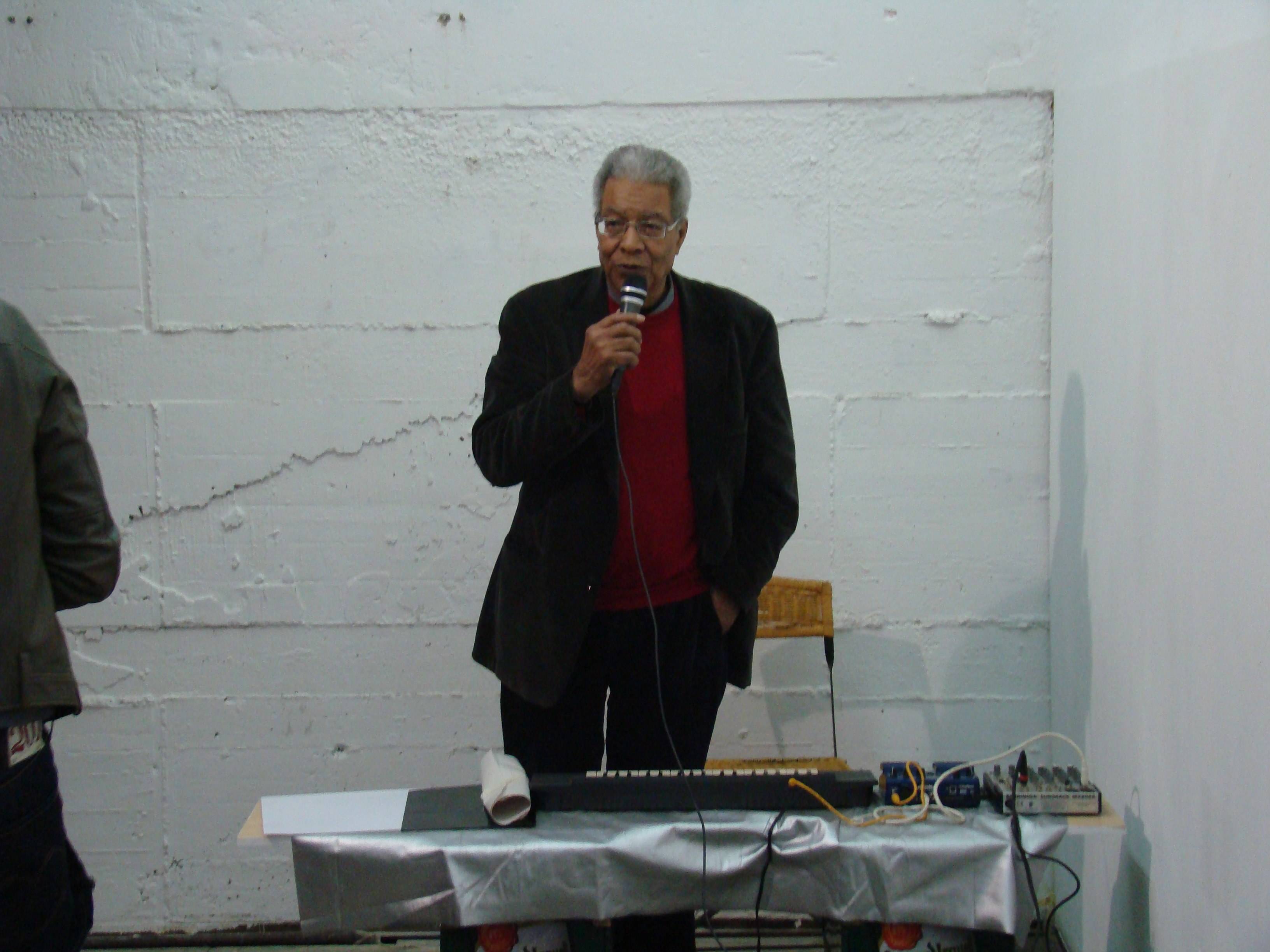 I met Benjamin Patterson in October 2011 when he was setting up for his „Burry Ben“ performance in Schau Fenster, the art space I run since 2010.

He was arranging his keyboard in the far end of the long narow space, cabeling it and when he finished he joined me at the bar that I was busy preparing for the night. We were an hour early. The other artists and the curator Petra Stegmann were still busy with the Fluxus conference at the Akademie der Künste.
I believe I poured Ben a vodka and had a prosecco myself. „Is it okay to smoke?“ Ben asked politely. „Sure is! You are in Berlin, Ben,“ I replied. Ben pulled a little metal ashtray out of his pocket. What a fine gentleman, I thought to myself. I had long been completely socialized by this punkrock city myself where everybody just drops the ashes straight on the floor. Of course Ben was nothing close to punkrock. He had been a double bass player in philharmonic orchestras before becoming a performing artist. I lit his cigarette and what followed was a beautiful hour of conversation and stories.

Ben told me in his soft and placid voice how he had hitchhiked through all of the US after finishing highschool in what must have been the early 1950s. „Not even Jack Kerouac was on the road then,“ I called out impressed. „And in San Francisco I spent all my money because Thelonious Monk played in a club and I had to go see him five nights in a row.“
„Well, I don’t want to sound romantic, but that is about the only reason for me to step into a time machine. Monk is god!“
In the hour Ben told me stories about the period between WW2 and Korea. He recalled a time that shaped a generation of women and men who would go on to produce social movements around civil rights and later on the anti war movement. It was also an era that spawned art forms and scenes like the beatnicks and Fluxus which were to become bohème and avant-garde predecessors of the mass hippy culture.

Soon everybody arrived and the evening began with its performances and happenings. Willem de Ridder passed around little paper notes with instructions written on them such as: „Walk around the room, touch every pillar and pass this note on to the most likeable person in the room“. Tamás St.Turba made a performance titled „Idle Walk“ which consosted of him wearing an Osama Bin Laden mask outside the gallery banging with his hands on the 25 meter long display window (which by the way enlarged a crack to the extend that the window had later to be replaced).
I have been showing art in Berlin for more then a decade now, presenting artists who are in their majority let’s say between twenty-five and fifty years of age. And even though some think of themselves as rebel, anti-bourgeois or offbeat most of them are in fact really well behaved and friendly.
Not that the Fluxus artists were not friendly that night in 2011. To the contrary. Yet the manner in which they conducted themselves had something childish to it. It was not childishness in a naive or even in a regressive way. Rather the type of childishness a grown person acts purposefully to take a stand. A stand that today might seem a little strange and outdated. But, in understanding the time from which it came it all made sense. Their approach stemmed from a time in which a man was meant to be a „man’s man“, if you know what I mean: fight wars, earn a living, fill a fridge, be reasonable. And do not mess with useless art! There was this joyous childrens glim in their eyes as they performanced.
I grew up in a time when the word „Fluxus“ already was established and honorable, a movement that was taken seriously and that was discussed academically. It occured to me that evening that in its inception Fluxus must have been an artistic form of refusal set towards a still authoritarian society. The childlike twinkle in the performers‘ eyes was an expression of a devilish, childish joy. I won’t obey! And yes, today it would seem rather naive. But back then it was probably the most reasonable thing to do.

So by the end of the night we all ripped paper from large newspaper rolls and threw the crumples onto Ben while he was playing tones on his keyboard untill by the close of his performance he and his set were completely burried underneath a big white paper mountain.
Ben will return to Schau Fenster on March 14th to open up a retrospective, perform and celebrate. Benjamin Patterson will turn 80 years old. Which is awkward because he feels very young to me. May he live long and well! Happy birthday, Ben!